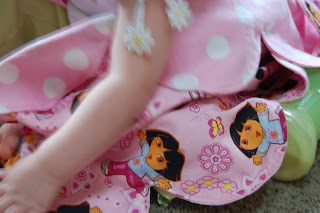 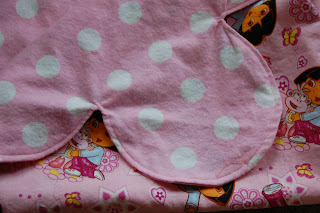 Today I took my youngest to the doctor to have her bandage taken off. Three weeks ago she fell on a chair and wedged her fingers between the chair and the baseboard resulting in fractures and deep cuts. When he took the bandage off I was a little fearful of what I would see. But, they looked amazing (a bit gross with the black fingernail and remaining stitches) and have seemed to have healed almost perfectly. She still has fractures in her fingers, but those will heal on their own over time. As she took a nap today I decided to make a blanket for her to have when she woke up as a reward for being so dang good today and throughout the whole thing. She LOVES Dora the Explorer and it's one of the few words that she can say, so I bought some Dora fabric at Hobby Lobby that she wouldn't let go of. I am not a fan of buying stuff (clothing, fabric, shoes, etc.) with tv characters on them, but it was kind of cute when she wouldn't let go of the bolt and kept saying, "Dora, Dora, Dora." So, I gave in and found a pink and white polka dot to go on the other side. I made it like the scallop blanket in Amy Karol's Bend the Rule's Sewing book, but with just two layers and bigger scallops. It turned out fine - it was quick and she loved it. That's all I wanted.
Posted by traci at 5:05 PM

Oh the poor darling! I dont think we realise just how brave little are do we? I know what you mean about Tv characters on things as so many things designed for children aren't designed well its like they know the Kids will want it anyway wether its pretty or not! But this is a really cute fabric and it looks lovely made up too.