from dad's shirt to a little dress 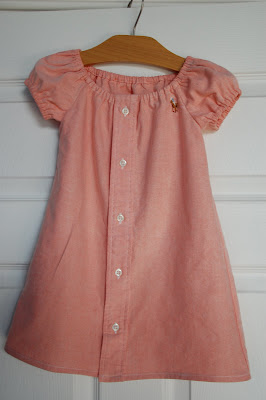 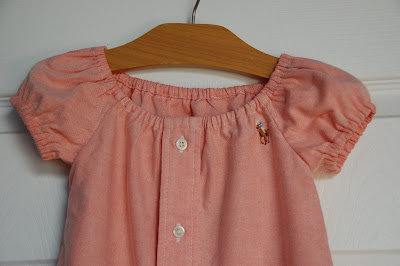 I started this dress last fall and then while I was working on it, the little one it was intended for spilled paint on the unfinished sleeve. I had left the fabric paint out from a past project. I tried so hard to get it out and thought I was unsuccessful. So, I put the unfinished dress in the "get back to later" bin. I pulled it out yesterday and realized that the paint stain was gone (mostly). I guess. So, I picked up where I left off and got it finished. I asked to put it on her this morning and she said, "no dress." I think she is still in a sour mood from being sick, so maybe next week when it's a bit warmer I will get a photo of her in it. It's made from her dad's old high school Polo shirt. Great color for a girl and I don't know if I would have liked her dad in it in the 90's, but you never know. I think it will look great on her with a pair of white leggings!

*UPDATE* For the dress I used a Simplicity Pattern 5695 and just laid it over the shirt to cut out the pieces. Dana over at MADE wrote a tutorial to make a similar dress here. Happy sewing!
Posted by traci at 5:52 PM

That dress is really cute. What a great idea.

That is sooo cute.. what a great idea... I think jeff's got a few of those old polo shirts lying around too.

Oh my! I LOVE this!! It is so cute. And I'm totally stealing the idea :). Great refashion!

Wow, you are so creative! I love this. I still have my daughter's peasant pattern from last year and am going to use it again but with some adjustments since she has grown. :) I've been trying to think of ways to embellish the design and this is a fabulous idea. Like Dana, I'm definitely going to do this. THANKS!

I'd love to post about your too cute creation in an upcycling column I have on my site, if you're up for it just shoot me an email at kidsstuffworld @ gmail dot com

So cute, you get the best ideas!

saw this on ModEco Kids blog. Such an awesome idea! THanks for sharing!

How did you transform it? My husband has a collection of shirts and polos in 80's and 90's color scheme. I don't want to dish them out in the garbage yet now that I have a daughter.

Wowza!!!! I wish I had seen this before we donated all my husband's old dress shirts.

Where did you find the pattern?

I finally finished a version of this for my daughter--thanks for the inspiration! I used one of my old blouses this time, keeping the neck "as is"; looking forward to trying one of her dad's shirts with your style of sleeves and scoop neck.

Also, apparently your sister's mother-in-law is my sister's boss (...or something like that..) in San Diego. Small world!

I'd love to know what pattern you used too.

I just found your site & I'm in love with the "dad's shirt- dress"! Do you have a tutorial on how to make this or are you able to help a 'new to sewing' person out? We just found out that we're having a girl & my nesting urges are crafting :) With my boys I did a womens build project with HFH. This time I get to make something cute.

Do you have a pattern you went by to create this dress? I love it and would love to do this w/ some of my dad's & father-in-law's shirts.

Love it! Pinned it, too! I saw it pinned from another site, but wanted to pin it from your cool site :)

Hello,
today I found Your blog and I saw the post with the cozy dress for girls.
I have not a little daughter or a
granddaughter and so i sewed a shirt
for me from a men's shirt.
You can see it at my blog named:
hansundgrete-shop.blogspot.com.
There it is.
Greetings from Germany
Olga