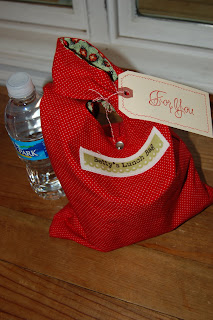 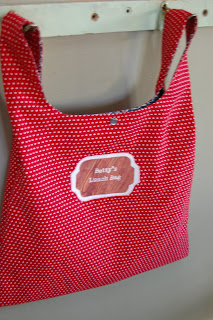 I really tried hard this year to give my mother in law something she needed for Mother's Day. She is trying to down size her house and I know she likes the things we have given her in the past, but I didn't want to give her more stuff that she might not have room for in her next place. So, I tried sewing a lunch sack out of laminated fabric since she works and takes her lunch every day. Yeah, I know there is a trick to sewing with it (as well as oil cloth), but I didn't check in to that and I really messed up a simple bag. I was getting frustrated, so I decided to buy her one made out of oil cloth that I had seen for sale at our local craft/decorating store. We were getting ready to go Saturday night (yes, last minute), when I decided to look up their store hours just because. Yeah, it was 20 minutes away and it was going to close in 5! So, that idea was out the door. Finally, I thought, "hey a lunch bag, instead of a sack, would really be better because she brings Tupperware with leftovers and needs a bigger bag. And, thank goodness, I didn't just give her a tiny lunch sack." Now, I was thinking, so I looked up a tutorial and an hour later I had a bag - only it was a bit small. I didn't follow the tutorial to the tee and tried to wing it a bit. So, then I thought, "I'll make her another one that is even bigger so she can have two - one for when she brings just a sandwich and one for the big leftover day." Okay, it was late and I started another one. Well, needless to say, I didn't get it done until today - Monday - the day after Mother's Day. I did give her the small one with the promise of a bigger one. I like how the bigger one turned out especially and think that I am going to make them for the kid's teachers as an end of the year gift. Hopefully, I will start out making one big enough so it won't be the endless gift making again!
Posted by traci at 11:53 PM

I love the spotty red one and don't worry about leaving things to the last minute I go on holliday is 3 days and have a least 4 pairs of shorts to make! aaaaaaaaaaH at least they are for my babies not me!

Hmmmm, do I go anywhere that I could use a lunch bag? Unfortunately not, but I love the bag, very cute, maybe I could make one for my mom. I am so in love with your April 22nd posted red bag. What fabric is that?

You are so smart! Of course I need a lunch sack to take snacks to the many games and practices we attend. Thank goodness for you and your sharp mind! Did you follow the same tutorial for the big one, or are you going to post your new revised tutorial?